‘In today’s world, where groups in society tend to be opposite to each other, I truly think culture in general can play a mediating role by showing the (historical) values we share.’

Today’s interview is with Martijn Kleppe of the National Library of the Netherlands.

Martijn Kleppe works at the Research Department of the National Library of the Netherlands (KB) where he is advisor for Digital Scholarship & International Relations and a member of the Digital Humanities Team. Before moving to the National Library, he finished his PhD on iconic photographs at the Erasmus University Rotterdam and worked on several digital humanities projects. In these projects he collaborated with humanities researchers, computer scientists and European cultural heritage institutes to further open up and connect their collections. Photo by Jos Uljee, Koninklijke Bibliotheek/National Library of the Netherlands.

Why is open culture important to you? Why do you get out of bed each day to do this?

As a society we share so much richness that is expressed through our culture. It is incredibly challenging and rewarding to bring this richness to people in a way they did not expect or experience before.

Who benefits from open culture and how?

People with all sorts of backgrounds. I am thinking of my neighbour who is doing genealogy research on his family but I also think of a friend who is a teacher and shows paintings from the Rijksstudio of the Rijksmuseum in

his classroom. At the National Library of the Netherlands (KB), I collaborate a lot with academic researchers, both humanities scholars as well as computer scientists. Both are always looking for data that is preferably openly available. Humanities scholars use this data to undertake their research, computer scientists to train their algorithms. This range of applications of open culture, from citizens who use it for their hobby up to high-ranked professors, to me truly shows the power and added value of open culture.

Can you tell us about a successful project / achievement using open culture resources?

Every year we organize a hackathon in which we challenge developers to link cultural heritage collections and bring them in an innovative way to the wider audience. This year, a programmer developed a Facebook Messenger Bot that allowed you to retrieve cultural heritage data from Wikidata. First prize was 60 hours of development time to bring this winning concept to a next level by developing a prototype. We enjoyed this project so much that we spent way more time on it and eventually built the KB Lab Bot. This is a Facebook Messenger Chatbot that allows you to search and retrieve digital cultural objects from the Dutch website Memory of the Netherlands. But we also built an open source CMS that allows other cultural heritage institutes or any individual to build their own chatbots. To me it really shows how you can be inspired to build new applications, just by using the fantastic open culture resources that are out there. Why is it important for these resources to be available freely?

The values we share in our world are communicated through our cultural heritage. Especially in today’s world, where groups in society tend to be opposite to each other, I truly think culture in general can play a mediating role by showing the (historical) values we share.

We have taken huge steps in digitizing and opening up our digital culture collections. These collections are now mainly presented on institutional websites or through aggregators such as Europeana. But for collections to really be used and discovered, we should find ways to bring them to the daily lives of people. A lot of institutes are already doing a great job by uploading their collections to Wikimedia. The next step will be linking collections to each other by using smart techniques. Imagine the following scenario. Everyday I read the news on a website. In the article, a photo is included of a building. By clicking on the photo, I will automatically get to see historical images of the building as stored in a museum, maps of the building as stored in a national archive and historical newspapers containing news of that location as stored in libraries. I will not have to leave my daily routine but am offered open culture collections during my daily visit to a single website.

One of the projects I like a lot and literally use about a dozens times a day is the Art Up Your Tab Chrome Extension. Every time I open up a new tab in my browser, I get to see a piece of art from the Europeana Collection. It is such a great idea to bring cultural resource literally to everyone’s desk (top).

What is your favourite piece of digitized culture, e.g. favourite artwork?

I wrote a dissertation on Dutch iconic photographs and became fascinated by this photograph of former socialist leader Pieter Jelles Troelstra: In Dutch historiography, Troelstra is well-known for his failed attempt to start a socialist revolution in 1918. In textbooks, this photo is almost always used to illustrate that revolution. It is indeed a fantastic photograph: Troelstra is speaking to the crowd passionately, spreading his arms, while everyone is looking at him. However, during my research I discovered this photo was not taken in 1918 but in 1912 during a completely different event. Back then, Troelstra advocated for women’s suffrage and organized several rallies, this photo was taken during one of them. I started my research on the photo by doing analogue research and dug up the original photograph in the depots of the IISG. However, the photo was very small and did not allow me to to scrutinize it closely. But when I found the digitized version of the photograph, I discovered something crucial: the men in the crowd have small leaflets on their hats. Once I obtained a high-res scan of the file I could zoom in as much as I wanted to, to be able to read the texts on the leaflet at the bottom of the photograph: Algemeen Kiesrecht (Universal suffrage). Only then I realized this photo could be of a completely different revolution than the one it was always used for until then. 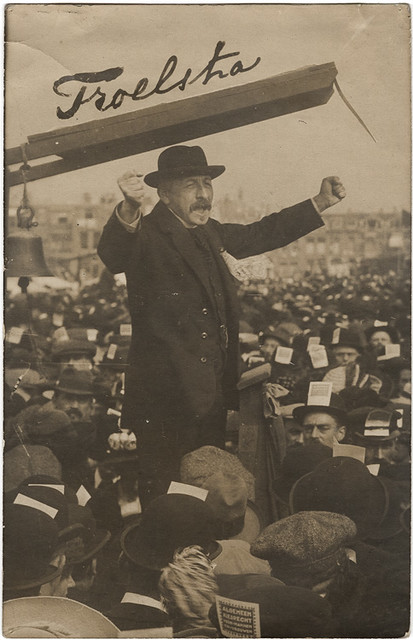